A 29-year-old Marine is dying of a rare brain cancer. Burn pits caused it, his family says. 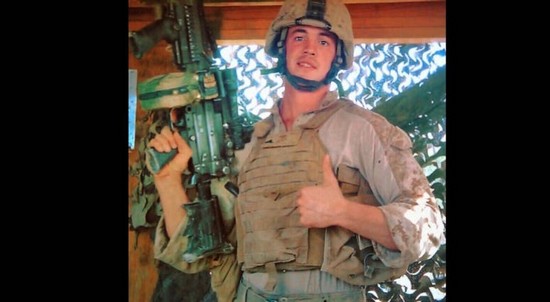 Patrick Duva is a 29-year-old Marine Veteran. He's a history buff, a terrible dancer and an ace at trivia.

He wants to be a teacher. He's a pizza connoisseur and the life of the party. He's brave, protective, bright, charming, and yes, a little stubborn.

He turned down full college scholarships to serve his country after witnessing the terrorist attacks of Sept. 11, 2001, in New York firsthand as a kid.

Now, Duva is dying of cancer. Two tumors in his brain, on his pineal and pituitary glands, and a series of tumors on his spine have affected his nervous system and left him blind.

He and his family are adamant -- Duva's cancer was caused by toxic exposure during his service in Afghanistan, where pits of burning trash smoldered and smoked all day and all night, spewing noxious fumes into the air he breathed.

"Pat always said, 'I went into the Marine Corps a healthy 18-year-old and I came out with all of these issues,'" Duva's younger sister, Brianne, 27, told Connecting Vets. "He felt in his heart that if he never joined, he would not have had the cancer. But he would not have changed anything."

The United States government failed Duva more than once. First, when it did not protect him from the exposures in Afghanistan, and then when his diagnosis was delayed by months at a Department of Veterans Affairs hospital, his family says.

Duva, of New Jersey, enlisted in the Marine Corps in 2009 and was stationed with the 2/3 Marines Weapons Company as a 0341 mortarman in Hawaii. From 2010 to 2011, he deployed to Nawa-I-Barakzayi District, Helmand Province, Afghanistan. While deployed, he lived and worked near burn pits, full of all the refuse of a military operation -- electronics, human feces, batteries, tires -- anything the Pentagon wanted rid of.

Duva left the Corps in 2013 and two years ago he began experiencing severe back pain, headaches and double vision. Duva got an X-ray at the East Orange VA Medical Center in February 2018, and his family said medical staff told him "everything looked fine" and "chronic back pain is common in Veterans." They sent him home.

But the back pain, headaches and double vision continued, and Duva went back to the VA again when his vision began to blur. During a test, an ophthalmologist found spots on Duva's brain and sent him for an emergency MRI. That MRI "took weeks to get," the family said, but eventually led to a cancer diagnosis in June 2018 -- four months after his original visit.

"They dismissed him," Brianne said. "If they would have taken him seriously, I don't think we would be here right now. It might not have gotten this bad."

So far, VA does not recognize any long-term health effects caused by burn pits or other airborne hazards during service but says as many as 3.5 million troops and Veterans may have been exposed since 9/11 and more than 212,000 have added themselves to VA's airborne hazard registry. There's a growing movement from Capitol Hill lawmakers, Veterans, families and even celebrity advocates like Jon Stewart, pushing for VA to cover illnesses Vets say are linked to their exposures, and several major bills in Congress aim to do just that. For now, the burden is on the sick Veterans to prove that their exposures caused their illnesses, though with Pentagon records notoriously incomplete, that's proven impossible for many.

Duva's is a rare pediatric brain cancer that evolved from the germinoma tumors in his brain and on his spine -- a form of cancer more often seen in children and less common for a previously healthy, athletic Marine in his late 20s who grew up playing baseball and tackle football on the front lawn.

VA approved and covered a referral for care outside department hospitals, and Duva began receiving chemotherapy and radiation treatments at a Manhattan hospital since VA doesn't specialize in pediatric cancers. In 2019, medical staff told him there was no longer any evidence of his cancer, his family said.

But by March of the following year, Duva was sick again, vomiting and having trouble walking. His family took him back to the New York hospital, where he was hospitalized for weeks at the start of the pandemic. It would take a total of four weeks before they learned that Duva's cancer had returned. And it's now inoperable. He stayed in the hospital until his release in June.

Duva had received the highest amount of radiation he could and wasn't a candidate for alternative treatments, his family said.

"His body never recovered" from the first bout of cancer, and "he chose to focus on palliative care, while still receiving some treatment," his sister said. In recent weeks, the focus has been more on palliative care, with the goal of providing him relief in any way they can.

On Sept. 11, Duva was placed in hospice and end-of-life care at home. He cannot see, eat, drink and can barely speak, aside from telling his family at his bedside that he loves them in the little time remaining to him.

His family said VA medical staff told Duva that his cancer was related to the toxic exposure he experienced during his military service, but VA "wouldn't document it." They're certain that what caused Duva's suffering is the air he breathed in Afghanistan, and that the delay in his diagnosis after VA dismissed his concerns, contributed to the terminal nature of his cancer.

Duva is a fighter, his family says. He's always been protective and he's not ready to leave them. But he still wouldn't take back his service. The son of a New York Police Department officer who died because of an on-duty injury, and the nephew of a Vietnam Veteran who lives with cancer caused by Agent Orange exposure, he has a family history of service.

When Duva left the Marine Corps, he was ready to start a new life. He wanted to go to school to become a teacher.

"Through his cancer diagnosis, and even being blind, he got his degree in history," Brianne said. "Even being cancer-riddled, he got that damn degree."

Brianne and Duva are a year apart, so they've always been close. She can't help but laugh or give a little frustrated sigh when she describes what it was like growing up with him.

"He's a history nut," she said. "At the end of the school year, he would ask to keep his textbook -- and they would let him. He could tell you about anything, wars, the presidents. I'd bet you $100 he could name all the presidents. Growing up, I found him annoying sometimes because he was always so good at everything."

Duva is a huge Yankees, Rangers and Jets fan. He loves going to games, having movie nights or going out dancing, even though he's terrible at it.

"If you met Pat, you'd feel like you knew him," Brianne said. "I always felt like I had to stake a claim because everyone wanted him around."

Chelsea, Duva's fiancée, met him at a friend's wedding, where they were beer pong partners at the reception, she remembers, laughing. He was newly home from Afghanistan and she was "a shy, good girl."

"He was just this Marine badass and I was so nervous," she said, smiling.

But Brianne, who was with Duva when they drove home that night, said Chelsea was all he could talk about.

"He would tell anyone it was love at first sight," Brianne said. "He knew he wanted to marry her that day."

Duva proposed in December last year, sick as he was. Even though it was a struggle, he got down on his knee for her in her apartment, "very sweet and simple and very us," Chelsea said.

"He protected me, even throughout all this he always managed to protect me," she said, tears in her voice. "I think he knew a lot longer before he said anything that this was it, but he kept saying he was OK, he was always reassuring me."

Chelsea doesn't regret Duva's service, either. It brought them, and their families together. His squad leader is now her brother-in-law, married to her twin sister.

"I would never have met him," she said. "And as much as this hurts, I would go through this again because I would never change the nine years I had with him and I'd much rather experience the love we have."

While Brianne is already mourning the brother she loves with her own fierce protectiveness, she said she's also ready to begin carrying the purpose he and his family have found in his fate.

"Never in a million years would I have thought his life would go this way," Brianne said. "It's horrifying. He was going to be someone. He always was. I wanted more for him. But even in his struggles and his very untimely death, his purpose now is to save the lives of other Veterans. We want his story out there. We want his brothers and sisters in the service and Veterans to hear it and advocate for themselves, make sure they're protected so this doesn't keep hurting them and their families like it has ours. If that happens, Pat will live forever, he's larger than life and he will never be forgotten."

The family has set up a GoFundMe campaign for those who would like to donate or learn more.