101-Year-Old WWII Vet Commissions Grandson Into Air Force: 'One of the Best Days of My Life' 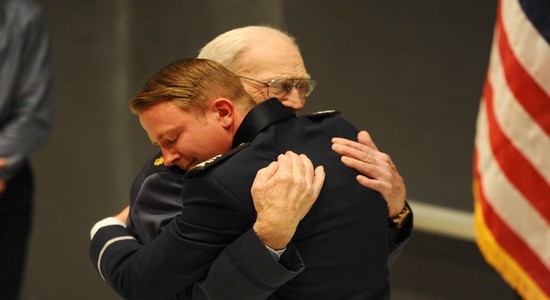 Graduating from the U.S. Air Force Academy is already an exciting milestone, but for one class of 2019 cadets, the ceremony served as a touching multi-generational event.

Walter Kloc, a 101-year-old WWII Veteran traveled some 1,500 miles from Amherst, New York, to Colorado Springs, Colorado, to commission his grandson, Joseph Kloc, as an officer in the Air Force on Wednesday, May 29, according to CNN and the U.S. Air Force Academy.

“This is what it’s all about … Walter received a standing ovation, and everyone in the room was gifted with a memory they’ll never forget,” Air Force officials wrote in a Facebook post alongside photos of the grandfather and grandson sharing the special moments.

Joseph shared the pictures in his own Facebook post, writing, “Probably one of the best days of my life.”

Walter was a bombardier and pilot for the Army Air Forces more than 70 years ago, CNN reported. He traveled to Colorado with his son and Joseph’s father, William Kloc, according to NBC affiliate WGRZ. Ahead of the event, Walter’s wife, Virginia, told WGRZ that he was “absolutely thrilled and excited” to be part of the graduation ceremony.

“I’m so excited for him,” William told the station of his son. “He’s fulfilling his dream, and he was so excited that his grandfather … World War II, Air Force, bombardier, pilot, could come and commission him.”

Walter was raised in Michigan and worked for General Motors after the war, WGRZ reported.